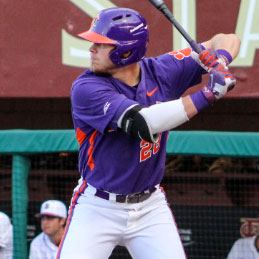 You know he’ll have the most popular jersey when he makes the majors.

Dropped off big time to end the year.
Diehards who play in dynasty leagues that allow for players to be rostered before they even enter pro ball have been rostering Beer since his freshman year at Clemson. His stock peaked in 2016, when he was named college player of the year, but he continued to hit as a sophomore and junior and was selected by the Astros with the No. 28 pick in 2018. The huge raw power from the left side that put him on the map remains the top selling point, but his stock slipped when it became apparent he would be a below-average defender anywhere on the field. He is a 20-grade runner, and while the power will clearly play, he needs to hit for a high average and get on base a ton to profile as a designated hitter/part-time left fielder, especially on a contending team. Beer did that at his first two stops, but his production slipped (3.5 BB%) after a promotion to High-A. Betting against players with this defensive profile is typically the best course of action.
The Zack Greinke trade that sent Beer from Houston to Arizona raised as many questions as it answered, given that he fits best at designated hitter. The Diamondbacks already have a couple National League misfits in Christian Walker and Kevin Cron, so Beer will need to max out offensively to be assured of regular work at first base. The 23-year-old slugger has big raw power and put up monster numbers with the Astros prior to the trade (190 wRC+ at High-A, 162 wRC+ at Double-A). His 12.9 LD% and 24.8 K% with the Diamondbacks' Double-A affiliate were career-worst marks, but he rebounded by hitting .315/.375/.452 with a 17.5 K% in the Arizona Fall League. While it seems safe to assume Beer would be a good big-league hitter, his 20-grade speed and below-average defense at first base and left field mean that he probably needs to be a great big-league hitter to play every day on a good team.
Beer spent last season at the Diamondbacks' alternate training site but didn't receive a big-league look, as Christian Walker, Kevin Cron, Jake Lamb and even Pavin Smith handled most of the action at first base and DH. The 24-year-old Beer was one of the big prizes coming from Houston in the Zack Greinke deal in 2019, but his production cratered at Double-A Jackson after the trade, and he hasn't had a chance to regain his swagger. He's been crushing the ball since his freshman year at Clemson, but his lack of defensive utility could make it tough for him to crack the Arizona lineup without a regular DH slot available, and the fact that Smith has leapfrogged him on the 1B depth chart isn't a good sign. If his bat develops as anticipated, Beer is capable of forcing his way onto almost any roster with his plus power, but he really needs to max out at the plate to overcome his limitations in the field.
BB-Ref Rotowire