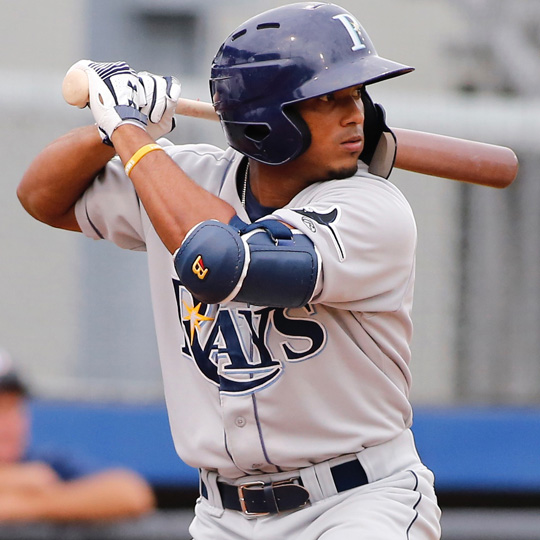 Amazingly, one of three Wander Franco’s to play pro baseball. This one is the best, so far.

Looking pretty hot.
He's for real.
Prior to Franco in 2017, here are the last five consensus top prospects from the July 2 international signing period: Kevin Maitan, Vladimir Guerrero Jr., Adrian Rondon, Eloy Jimenez and Franklin Barreto. Rondon looks like a bust and it’s too early to say what Maitan will be. Barreto is a big-league ready top-50 prospect with some upside and some flaws, while Guerrero and Jimenez are easily top-five prospects in the game. Investing in players who have yet to play a professional game, like Franco, is awfully risky, but recent history suggests it’s a risk worth taking if the price is right. Franco is a 5-foot-10 switch-hitting shortstop who turns 17 in March and is expected to eventually move to second base. He was considered the best hitter in this year’s class, with the potential to hit for a high average and offer 20-plus homer pop. The payoff will be at least four years down the road, but the upside is such that Franco should be stashed now in deeper leagues.
Franco won’t turn 18 until March 1, but already looks the part of a future superstar. A switch-hitting shortstop who may end up at third or second, Franco has the quickest bat in the minors. He made consistent, hard contact throughout his pro debut in the Appy League, finishing top five in ISO (.239), wRC+ (159) and BB/K (1.42) as the league’s youngest hitter. Franco was the clear top prospect in the 2017 July 2 international signing class -- pedigree that topples that of the typical player in that league. But consider this: Vlad Jr. toured the Appy League as a 17-year-old two years ago and tallied a .178 ISO, 122 wRC+ and 0.94 BB/K. Simply put, Franco is a significantly better hitter than the top prospect in baseball was at the same age. The Rays rarely fast track prospects, but Franco should be the exception. His MLB ETA is difficult to peg, as he has yet to make his full-season debut, but he will be ready for big-league pitching before he turns 20.
Franco's only imperfection as a prospect is that he is not yet in the majors. He does not turn 19 until March, yet he has already mastered the Appalachian League, Midwest League and Florida State League. The switch hitter has an extremely rare combination of elite bat speed and an elite approach (54:83 K:BB in 175 games), which will allow him to hit for a very high average with monster power in his peak seasons. He is also a plus runner, but he is still learning how to steal bases efficiently (56.4% success rate on 39 attempts). Even as the clear top signee from the 2017 July 2 international signing class, Franco has exceeded expectations every step of the way, which makes setting expectations for his third pro season something of a challenge. With the Rays in a contention cycle, it would be foolish to just assume Franco will spend another full season in the minors, but early 2021 is his most likely ETA.
Like most top prospects, Franco spent the summer at his team's alternate training site, but unlike most prospects, he was on the postseason taxi squad and got work in on the field prior to World Series games. His bat speed and contact ability remain elite, but he needs to lift the ball more to maximize his power output. Franco may no longer be a plus runner, but he should still be on base enough to steal double-digit bases. Shoulder inflammation cut short his winter ball season, and while the team says there is no structural damage, it's something to monitor this spring. If there is an MiLB season, he would open the year in the minors and could receive a first-half promotion to the majors. Franco (a switch hitter) won't be platooned, but the Rays generally love platoons and like moving players around, so it's possible he could gain eligibility at some combination of third base, second base and shortstop.
BB-Ref Rotowire