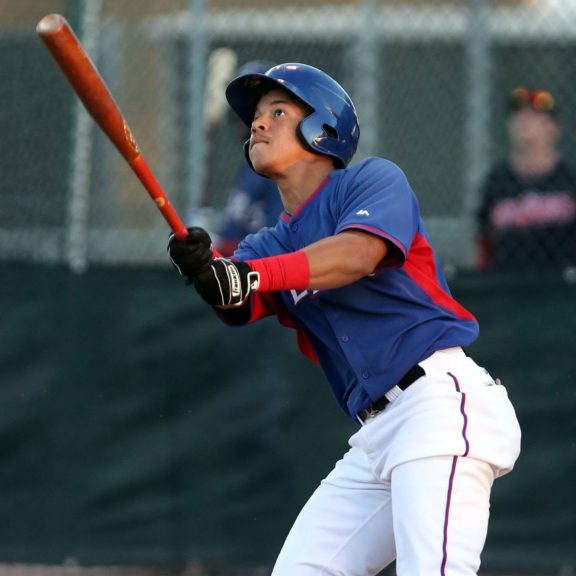 Hernandez's offensive upside is such that we can look past his defensive shortcomings for now. He was the second-best teenage hitter (181 wRC+) in the AZL, leading the league in HR, RBI and hits while ranking second in doubles. Hernandez saw time at right field, first base, catcher and designated hitter, with right or left field being the most likely long-term home if he is able to avoid being a strict DH. He has elite bat speed and a preternatural ability to manipulate the barrel and do damage in all quadrants of the zone. His 26.2 LD% and 4.8 IFFB% were impressive, but he could obviously stand to use the opposite field more (17.7 Oppo%). As a 20-year-old masher with some swing and miss in his game and no clear defensive home, he will need to max out offensively, but if he does, he could be one of the best bat-first players in baseball.
After spending his first two professional seasons in the Rangers' organization, Hernandez was dealt to the Rays in December, headlining the return for Nate Lowe. The 21-year-old will aim to continue his development in a new farm system that's full of both impact prospects and high-probability future big leaguers. In 2019, Hernandez cracked 11 home runs, drove in 48 runs (he led the AZL in both categories) and swiped three bases while also posting an impressive .302 ISO and .440 BABIP. He doesn't really have a locked in position on defense -- he might just be a designated hitter -- but he hits the ball incredibly hard and should get to the majors on the strength of his bat. One area of his game to watch heading into the upcoming campaign is whether he's able to drive the ball to all fields, especially after a 51.5 Pull% in 2019.
BB-Ref Rotowire